I’ve got blepharitis can I have laser eye surgery?

Blepharitis is the name given to the inflammation of the edges of the eyelid. It is quite common and is not usually a serious condition. It is not contagious; most people who develop it do so as a reaction to natural bacteria on the skin.

If you have questions about laser eye surgery and the options that are available for you, please call us on 0203 369 2020, or request a call back.

How do I know I have blepharitis?

Blepharitis can develop at any age, but usually occurs in people over the age of fifty. Symptoms may include:

In most cases both eyes are affected, but one eye can be worse than the other. Many people find their symptoms are worse in the morning. This is one way in which blepharitis differs from dry eyes – dry eyes usually become worse as the day goes on. However, blepharitis can also exacerbate dry eyes if already present.

Blepharitis is not associated with poor vision unless severe, but if you suffer with it and also need vision correction, you will probably find contact lenses uncomfortable.

Blepharitis can be caused by a reaction to staphylococcus bacteria, which exists naturally on the skin and is harmless to most people.

It can also be caused by seborrhoeic dermatitis, a condition where the skin becomes flaky and more oily than usual. This can lead to blocking of some of the glands in the eye, which in turn causes discomfort and inflammation at the edges of the eyelid.

Some people with blepharitis only experience one of these causes, but most suffer with a combination of the two.

How to treat blepharitis

Blepharitis is usually a long-term condition. It can’t be cured, but the symptoms and discomfort can usually be managed with good eye hygiene, application of warm compresses and massaging the area around the eye as well as the use of lubricating eye drops.

In more serious cases, your GP or eye doctor might prescribe antibiotics, either as tablets to be taken orally or as drops or ointment to apply directly to the eye.

Blepharitis should be treated before you have laser eye surgery. This is because, in the short term, laser procedures can cause dry eyes, and worsen symptoms in people who already have dry eyes or blepharitis.

Your laser eye surgeon will discuss your options with you, and find the best treatment for you and your eyes. Please note that having pre-operative blepharitis treatment may well delay the date of your surgery but will help you to be more comfortable afterwards.

If you have any questions around blepharitis, laser eye surgery, or our service, please feel free to make an enquiry or call us on 0203 369 2020

Can I have laser eye surgery if I have conjunctivitis?

Conjunctivitis is also known as red eye or pink eye. People suffering with it experience itchiness and watering of the eye as well as redness. 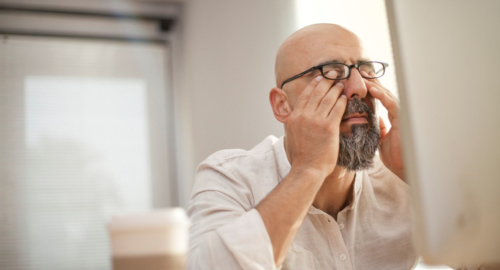 If you have inflammation around the edges of the eyelids or crusting, itching or discomfort, you may suffer from Blepharitis. If you have questions about