The eye on the dollar bill 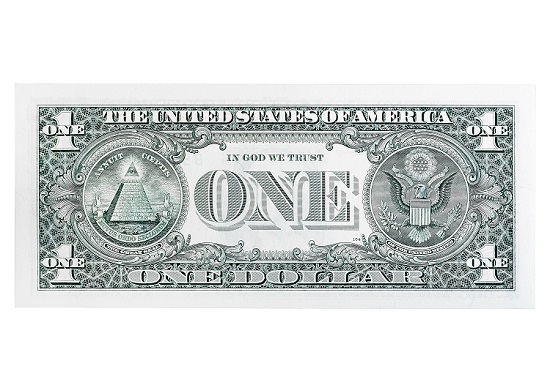 Last month we saw the Americans celebrating their independence from Britain, and, as laser eye surgeons, we thought it would be interesting to look at the symbolism of the eye that features on the American one-dollar bill. It’s a fascinating topic!

The story of the eye on the pyramid goes something like this. On the Fourth of July, 1776, the Declaration of Independence was signed. It was decided that the Declaration should also have a Great Seal which could be used to approve documents such as international agreements – indeed, the Great Seal is still used for this purpose today. A Great Seal Committee was appointed to come up with a two-sided design, and both designs now feature on the one-dollar bill. The front of the seal is the familiar bald eagle holding the striped shield. If we could see the back of the Great Seal, it would look very like the picture on the one-dollar bill, with an eye over a pyramid.

The eye design for the reverse of the Great Seal was the idea of committee member Pierre Eugene Du Simitiere. Nowadays, we’d call him a graphic designer and he’d spend his days straining his eyes with Photoshop (!), but in 1776, he was brought in as a skilled artist with an expertise in heraldic symbols. He chose the Eye of Providence, signifying God’s blessing over the newly independent country. The wording of the Declaration of Independence asks for “protection of Divine Providence” – it’s easy to see where Du Simitiere’s idea came from. His design was eventually adopted for the Great Seal in 1782.

The design was only copied onto the dollar bill in 1935. New bills were being issued as, for political and financial reasons, the Silver Dollar, with its Silver Certificate currency, were being replaced by dollar bills. It’s been there ever since.

But here’s something interesting. In the time elapsed between creating the Great Seal and putting its imagery on the one-dollar bill, the eye symbol had changed its meaning. It had gone from being the Eye of Providence, God’s protective eye looking down over us all, to being an exclusively Masonic symbol for God. Franklin D. Roosevelt, president at the time the image was introduced onto the dollar bill, was a Mason – a coincidence leading to a number of conspiracy theories surrounding the currency and the eye on the pyramid. These relate not only to Freemasonry but also to the New World Order. However, if you look at these symbols through the eyes of the Great Seal Committee in 1776, their meaning is a lot clearer and there’s no need for a sinister interpretation. 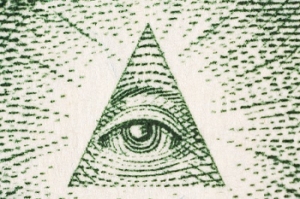 Do you want to learn more? You can read more about the risks of LASIK surgery to understand more about possible risks and side-effects.

It’s important to see clearly, not only for practical reasons but also so you can get the most from life. The all-seeing Eye of Providence is figurative, but it’s a good reminder of the importance of having clear vision, both inward and outward. We just hope it doesn’t book in for a laser eye surgery / LASIK procedure!