Who invented laser eye surgery and what is its history?

If you’re considering laser eye surgery, it’s likely you’ll choose LASIK – the most popular form of refractive surgery, which has improved the sight of over 30 million people globally since it was first approved in 1999. Laser therapies for use in medical treatments such as vision correction have existed since the 1980s. But who invented laser eye surgery?

The technique for what we now call refractive surgery had its origins in the work of Dr. Lendeer Jans Lans who theorised that cuts made in the cornea could rectify corneal curvature and cure astigmatism. He went on to publish a theoretical paper in 1896. Building on this theory Dr Jose Barraquer as far back as the late 1930s proposed that refractive errors such as myopia and hypermetropia could be corrected by modifying the shape of the cornea. He’s known as the Father of modern refractive surgery because of his work and innovation in the field.

Around the same time, a Japanese Ophthalmologist Tsutomu Tsato first practised refractive surgery on war pilots making incisions to the cornea radially which improved their vision but later resulted in corneal degradation. Barraquer continued developing the stromal sculpting method at his clinic in Bogota during the 1960s which evolved into modern-day Lasik.

Dr Svyyatoslav Fyodorov, a Russian ophthalmologist went on to develop radial keratotomy in the 1970s, an eye surgery procedure which was designed to flatten the cornea by making cuts which followed a radial pattern. The event that led to this procedure being developed came about when a patient he had been seeing for correction of myopia caused by astigmatism, had an accident during which glass particles became lodged in both his eyes. To save the boy’s vision, Dr Fyodorov performed an operation which consisted of making numerous radial incisions extending from the pupil to the periphery of the cornea in a pattern like the spokes of a wheel. After the cornea healed he found that the boy’s visual acuity had improved significantly.

RK enjoyed great popularity during the 1980s and was one of the most studied refractive surgical procedures, but it was not without complications and problems. Indeed, surgeons found it difficult to make an incision of an accurate size and depth that would give reliably predictable results. More improvements were still needed.

Developments in the field of lasers propelled vision correction into a new arena. Light from a laser is tuned to specific wavelengths which allow the light to be focussed into powerful beams. These beams are so intense that they are able to precisely cut industrial-grade steel and shape diamonds.

Studies in the 1970s with diatomic molecules and noble gases led to the invention of a laser called the excimer laser. Biological matter and organic compounds absorb ultraviolet light from an excimer laser but rather than burning or cutting, the excimer laser adds enough energy to disrupt chemical bonds in the surface tissue causing them to disintegrate in a controlled manner.

In the 1980s IBM’s Rangaswamy Srinivasan observed that an ultraviolet excimer laser could make clean and precise cuts to organic tissue while leaving no thermal damage to the surrounding tissue. These features paved the way for lasers to be used in delicate eye surgeries. In 1983 Srinivasan and Stephen Trokel performed the first in situ photorefractive keratectomy using laser to correct eye defects. 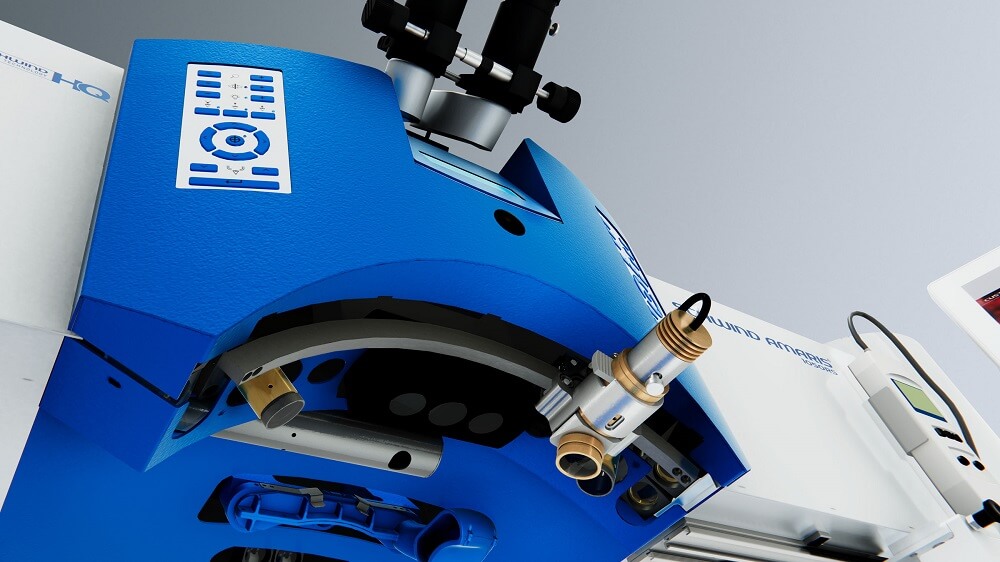 PRK: a forerunner of the modern LASIK procedure

PRK was approved for general use in 1995, when the PRK laser eye surgery was first was made available to the general public. Unlike LASIK (which stands for Laser-Assisted In-Situ Keratomileusis), PRK involves completely removing the outer layer of the cornea, the epithelium, before using a laser to reshape the cornea. A huge advance though this was, it came with very long recovery times so there was still a lot of room for improvement.

Meanwhile a blade called a microkeratome, with the ability to create a corneal flap, paved the way for modern LASIK in 1990. A less invasive procedure that requires less recovery time, the first LASIK procedures used a microkeratome to create a flap in the cornea, before switching to an excimer laser to adjust refractive errors. Today, a femtosecond laser is often used for flap creation.

Read more about the techniques involved in PRK, LASIK and other forms of laser eye surgery.

The advent of LASIK

Later in 1999, LASIK came along, which is now the procedure of choice for correcting refractive errors. It had actually been invented in 1989 by Greek ophthalmologist Ioannis Pallikaris, but wasn’t approved for use until a decade later. In essence, a hinged flap is created in the cornea, this is then reflected back, a sculpting laser is then used to mould the tissue underneath and once done the flap is reflected back into position. This effectively tricks the cornea into thinking nothing has happened. Initially done by a blade, the flap is now made with a very precise laser.

It’s easy to see why the procedure has become so popular – using lasers for both the flap in the cornea and the change to its curvature means that it’s easy to control, has predictable results, it’s relatively painless and comes with a very short recovery time – all the complications presented by the other procedures are finally resolved.

What makes LASIK such a popular choice?

LASIK is currently the most commonly performed type of refractive surgery. It’s also the most popular form of elective surgery in the world! There are number of factors that make it the go-to choice for patients:

It’s important to note, though, that everyone is different. Some patients may be more suited to LASEK or other refractive surgical procedures. For example, if you have thin corneas, LASIK may not produce the best results for you.

If you opt for LASIK with OCL, you’ll benefit from the most advanced laser technology currently available. Combined with the skill and experience of surgeons at the forefront of their field, you’re in safe hands!